Sunday (9/23): Professor Bennett and I had a Skype call to go over any questions that I had about the code. We found a couple of repeating errors that I need to go back and change. A big part of the problem was that when the students were copying their individual parts and pasting them into the “final” compilation of the text, they were taking their parts from <div> to </div> instead of just copying over the body. This isn’t the case for everything, especially if the <div> actually closed where it was supposed to. There were also a lot of smaller errors that some of the students made. For example instead of the code saying <div type=”chapter” style=”font-weight:bold;”>, the student would put “font-weight=bold”. On the reader, it would show it as Roman instead of black letter, but the editor would really have to look for something like this. However, I think it’s more of a mistake on the student’s part, simply because I feel we, the TA’s and professor, gave them all of the resources they need in a readable format (we put each step into a separate word document that was color coded and all the student had to do was copy and paste). Like I’ve mentioned before, we had the student’s switch their parts with their partners to double check the code, but clearly they either didn’t do it, or weren’t paying enough attention. This is another one of “those things” where I’m not sure how to reduce the amount of errors in student’s work other than by monitoring every click of their keyboard (which, of course, is not doable).

I wonder if it would help if we could make some sort of visual that would help the students step back when they’re trying to figure out which element comes first. So if we were able to make a upside down pyramid to show the broad elements to the specific. Something like: 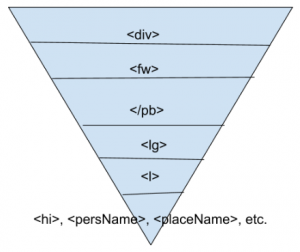 It could just be something that students could use as a “quick reference”. We’ve already done something similar for inline features and styles, but that’s also not working that well either. I think the students got careless with it, but even the students that tried really hard to work with their groups and the code made simple mistakes that were easily avoidable.

Friday (9/28): While waiting to go over the code with Professor Bennett, I’m going back through the texts and making sure everything is correct. The issue with TAPAS is that the reader doesn’t always show how the text is encoded. In other words, the code may say something is centered or aligned right, but the TAPAS reader doesn’t show that. You still have to make sure the code is still right,  but there isn’t really a way to check it. It’s the same way with Oxygen; it will let you know the line has a feature, but it won’t show you if it’s actually centered.

Saturday (9/29): After going through the transcriptions for a second time, my next step will be to go through the code and link the personographies.

Back to Internship Blogs