Part 1: Rules for transcribing early modern texts for publication on the KMP site and TAPAS platform

Part One of this transcription guide closely follows the “How-to #0: Rules for transcription” guide authored by Janelle Jenstad and Martin Holmes at The Map of Early Modern London. Every transcription project has its own set of editorial principles, guidelines and rules. The MoEML approach is very straightforward and we shall follow their lead.The initial transcription is a diplomatic transcription; in other words, we try to reproduce every feature of the original text as precisely as possible.

MoEML closes up extra spaces between words and punctuation marks. However, we retain the spacing in authorial initials, such as A. M. (for Anthony Munday). We add a single space after a coma when the comma has been used to separate two words.

Unusual characters would be reproduced. A range of archaic and unusual glyphs (hieroglyphic character or pictograph) may appear in your texts. All should be available in Unicode, so you should be able to reproduce them.

This list is hardly exhaustive. You will likely have to search the internet for many special characters that you find in these texts. That said, please expand ct, ff, fi, ffi, ffl, ft, and st ligatures.

Preserve hyphenation, both within and at the end of lines. While transcribing, put end of line hyphens in [square brackets] so that you may encode them into the line breaks later.

We retain the interchangeable u/v and i/j and the use of vv for w.

Typographical decorations including bold, italic, and underline, should not be reproduced in your transcription. We encode these features with CSS code later on.

As we move forward in this round of encoding, we’ll use this post to compile prof. and class-generated transcription tips.

The most frequently asked question in this part of the course is: What do I do with all of the stuff I’m not formatting right now, like italics, font shifts, headers, indents, chapter headers, catchwords, and signatures (to name a few)?

Use the following diagram as a reference to remind yourself about components of the text that will require special formatting moving forward. My hope also is that this diagram will serve as a reminder to include running headers, catchwords, and signatures – whether they have been omitted or not. Please feel free to ask as many questions as you have as we move forward! 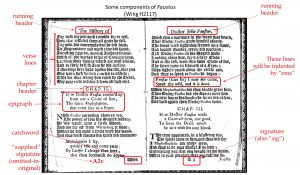