This 1950 Everyman’s Library edition of The Second Part of Tamburlaine the Great was originally edited by Ernest Rhys. Stephanie Bear later prepared the edition for republication on the Renascence Editions website. This edition is fully downloadable and features modernized spelling. 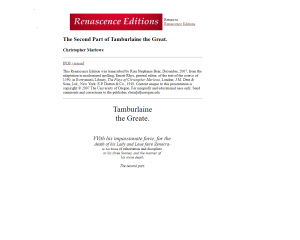