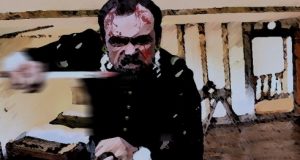 The bar fight was really a bar fight.

One theory that explains Christopher Marlowe’s death is the bar fight theory. This theory says that Marlowe was killed on May 30th 1593 at the age of 29. He had spent the day drinking with friends at Eleanor Bull’s establishment in Deptford. These friends included Ingram Frizer, Robert Poley, and Nicholas Skeres. All was going well until the bill arrived for the day of heavy drinking.

A fight broke out among the four men about who should pay for the drinks. Supposedly, Marlowe stole Frizer’s dagger and threatened him with it. After that, Frizer gained control of the dagger and killed Marlowe by stabbing him in the eye in self defense. Or, Marlowe pulled a dagger out during the fight, Frizer grabbed it, and subsequently stabbed him in the eye.

After the fight, the remaining witnesses agreed that Frizer killed Marlowe in self defense. The coroner agreed.

BACK TO DEATH CONSPIRACIES