“Modified” by William Mountfort, this farcical edition of Doctor Faustus was published in 1697, and performed multiple times at the Queens Theater in Dorset Garden. The edition was later edited and republished in 1973 by the Augustan Reprint Society at the University of California Los Angeles. 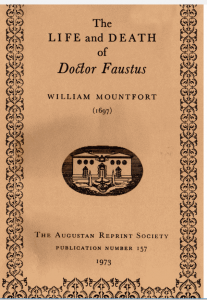