Director Nick Bagnall’s intense adaptation of Shakespeare’s Henry VI Part I is a fast-paced performance with plenty of sword fights, a young king, and a captivating martyr. The show stars Graham Butler as the naïve and quiet King Henry VI, Garry Cooper as the soft-spoken Duke of Gloucester, and Beatriz Romilly as the bewitching Joan of Arc. Performed and filmed on an outside stage in 2013, the actors never fade into the background despite the striking set and the never-ending rain. Each character is vivid and professional—not a single actor giving a poor performance. 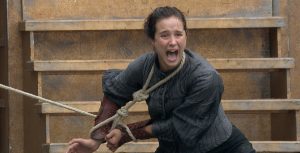