Nikita Milivojević’s stage adaptation, translated from Serbian to English by Zoran Paunović, and part of the 2012 Globe to Globe Festival, was performed by the National Theatre in Association with Laza Kostic Fund, from Belgrade, Serbia. Starring Hadzi Nenad Maricic in the role of King Henry VI, Predrag Ejdus as Bishop of Winchester, and Tanasije Uzonovic as the Duke of Gloucester. The performance follows the history of England after King Henry V has died and his young son, Henry VI, unsuccessfully attempts to mitigate quarrels between English troops, resulting in loss of land to the French. 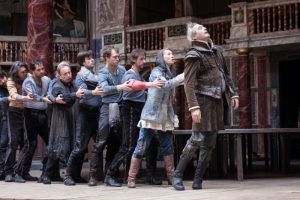 Performance available for rent or purchase on Globe Player