The play was reprinted with only minor changes in 1612. In versions like this one imaged by the British Library, the title page was expanded to reflect the dramatic role, not only of Edward the second and proud Mortimer, but also of Peirs Gaveston, the great Earle of Cornewall, and mighty favorite of King Edward the second.

In early copies like this one, there are no acts or scenes. Later editors often divide the play into five acts. 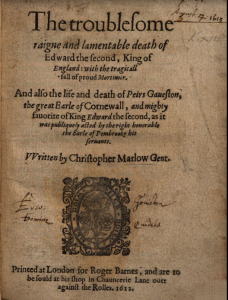